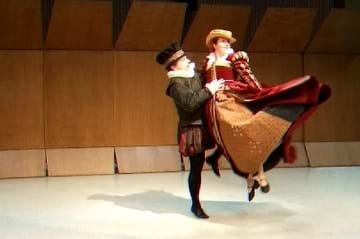 Peter Durham researches, teaches, and performs historical dance of Western Europe from the years 1450 through 1651.

Dance practices in Kirkland have resumed as of July 2021. Seattle practices are still suspended.

These are evenings sponsored by local SCA groups where Peter teaches social dances from 1450-1651 so that all interested can participate.

Peter has prepared and taught a variety of classes providing overviews of dance through this period, focus on particular types of dance, and information about the sources. Classes can be customized to meet the needs of your group.

Dances from the Inns of Court London 1570-1675 contains the eight Old Measures plus two more almans.

Pamphlets with instructions for dances are also available.

30 Sep - 9 Oct 2016: Peter and the men of Seattle Early Dance performed Buffens at the 2016 festival of Men in Dance. Read the Seattle Weekly review.

10 Mar 2015: Peter performed with Seattle Early Dance in A Masque Across Time at Trinity Parish Church in Seattle, WA.

12-19 Jul 2014: Peter was part of the faculty of the Madison Early Music Festival, teaching and performing with Anna Mansbridge at the ball, dance classes, student concert, and concert series performance with Ex Umbris.

6-12 Jul 2013: Peter participated in the Madison Early Music Festival, performing with Anna Mansbridge in her lecture/demo, at the masqued ball, and in the student concert.

1-2 Dec 2012: Peter performed with Anna Mansbridge and Master Chorus Eastside in My Dancing Day: A Renaissance Christmas in Issaquah, WA and Kirkland, WA.

1 May 2012: Peter performed with Seattle Early Dance in The Noble and Necessary Art of Dancing at Trinity Parish Church in Seattle, WA.

25-27 Feb 2011: Peter danced in a production of The Indian Queen, a collaboration of Seattle Early Dance, Baroque Northwest, and Early Music Guild. Read the Seen and Heard review.

11 Jun 2005: Peter was part of the Seattle Early Dance performance at the LAUNCH forum at Trinity United Methodist Church in Ballard, part of the Second Saturday Ballard Art Walk.

11-13 Feb 2005: Peter danced the part of a huntsman in the Early Music Guild production of John Blow’s Venus and Adonis, a baroque opera. Performances were at the Falls Theater at ACT in Seattle. Read the Seattle Post-Intelligencer review.

18-19 May 2005: Peter taught workshops on dances from Shakespeare at the Shakespeare Festival at Maranacook Community High School in Readfield, ME.

17 Feb 2005: Peter taught workshops on dances from Shakespeare for students of the Fountain Valley School in Colorado Springs, CO.

18 - 25 Jun 2016: Peter taught at the SCA 50 Year Celebration in the European Dance track. Download handouts for the classes: Dances from Shakespeare, My Favorite Galliards, My Favorite Canaries, Mommy, Where Do Dances Come From?, and The Old Measures.

Peter has taught at most of the KWDS events since 1997. At KWDS XI in Germany, he taught Beginning Caroso Dances and My Favorite Galliards. He organized KWDS VI in Seattle, which featured three days of workshops, and three evenings of dance. See the event web site for all the details. Peter taught Survey of European Dance Sources or similar classes in 1997, 2001, 2007, 2009, 2012, and 2013.

These annual SCA events combine four hours of instruction in the afternoon with an evening of dancing to live music. In 2012, we did Day of Dance as a full day track at the Performing Arts Grand Ithra in Bellevue, WA on 17 Nov 2012.